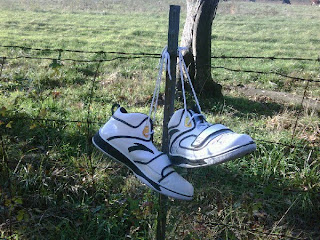 Shaq is at it again! Minutes ago Shaq tweeted the following: "Aagh man I dropped some autographed garnett shoes signed by me and him hint rt 2 and sudbury road ask da cows". Some lucky Celts fan in the Sudbury area just nabbed a pair of KG's Antas. Not to mention that they are signed by two first ballot Hall of Famers.
Posted by Celtkicks at 4:49 PM No comments:

During last spring's NBA Finals Rajon Rondo was a bright spot in the Celtics title run. During these games he wore a bright green Nike Hyperfuses that set the underground sneaker community a buzz. Capitalizing off this hype, Nike has decided to give Rondo his own make up of the shoe. The shoe features an all green upper with Rondo's #9 adorning the ankle. The shoe is slated to release in November, but specifics are yet to be released.

Posted by Celtkicks at 7:55 AM No comments:

FRESH FROM THE COURT: Kevin Garnett

It appears that Kevin Garnetts injury is beginning to heal complete. This is cause for celebration in Celtics world. Another cause for celebration is this new colorway of KG's Anta signature shoe. This colorway is predominately black upper with pops of yellow on the upper lace holes. I can't wait to get my hands on a pair of my own.
Posted by Celtkicks at 4:09 PM No comments:

FRESH FROM THE COURT: Nate Robinson

The Celtics may have lost their first game of the year, but Nate Robinson was a big winner with sneakerheads all over the globe. Nate set twitter on fire with these Air Jordan "Space Jam" XI's. If you want a pair of your own, they are currently fetching $250 to $300 on ebay.
Posted by Celtkicks at 4:04 PM No comments: 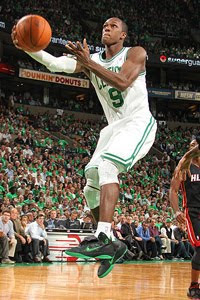 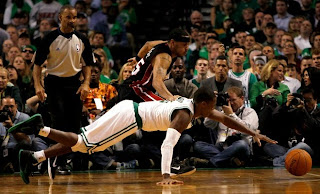 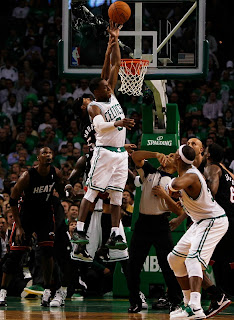 A headbandless Rajon Rondo was integral in the Celtics opening night victory over the much hyped Heat. The real heat on the court came in the form of Rajon Rondo's black and green Nike Hyperfuses. Rondo added his own personal flare to the shoe by keeping the top lace holes unlaced and keeping the tongues floppy. What are your thoughts on Rondo's Hyperfuses?
Posted by Celtkicks at 6:17 PM No comments: 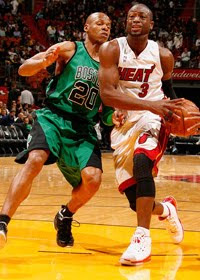 Tonight's season opening game between the Boston Celtics and the Miami Heat is going to feature two of Jordan Brands premier athletes. Ray Allen and Dwayne Wade will face off on the basketball court and the court of public opinion. These two are no stranger to sneakerheads world wide and are known for the neck breaking Player Exclusive Jay's. What do you think they will wear to open the season? All eyes will be on this game and all sneakerheads eyes will be on their feet.
Posted by Celtkicks at 6:24 PM No comments: 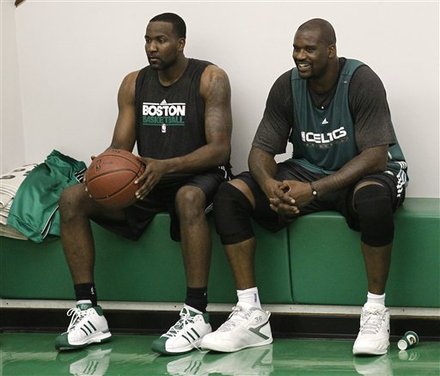 During Monday's practice in Waltham, Yahoo Sports snapped this pic of Shaquille O'neil and Kendrick Perkins. Perkins is currently rehabbing his ailing knee, which he injured in last years NBA Finals. He is hoping to get game ready for January and is training in a pair of Adidas Pro Models. If you like the shoes you can grab your own pair on Eastbay.com for $79.99 . They have a full size run 6.5 to 18 men's. The colorway pictured appears to be player exclusive, but Eastbay does have a Celtic Green pair on the sitre. This shoe offers classic style with modern big man support. Not to mention the price is easy on the wallet!

The following are the specs for the shoes:

Nicekicks.com is a beast in the global sneaker community. Recently they profiled Nate Robinson's impressive run of PE's between the 2009-2010 season. CLICK HERE to view the article.
Posted by Celtkicks at 3:32 PM No comments: 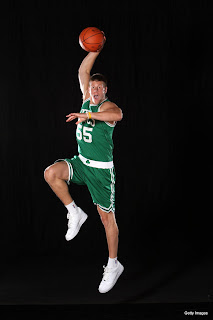 The Celtics selected Notre Dame's Luke Haragody with the 52nd pick in this years NBA Draft. Luke has since signed a two year deal with the Celtics and had a strong performance in this years NBA Summer League. Luke recently took part in a rookie photo shoot. In the pictures Luke is wearing a pair of Nike Air Force 1 white/whites. Let's hope he doesn't rock these during the actual season, as it would likely lead to the tearing of every tendon in his ankles. Fresh pictures none the less.
Posted by Celtkicks at 12:32 PM No comments:

During the Celtic's historic Championship run, Nike released their 25th Anniversary Edition of the Air Force One. During Several games that season, young upstart Glen "Big Baby" Davis was spotted rocking these shoes on the court. In addition to the traditional releases, Nike had a "Leauge Pack" that consisted of limited edition colorways for each team. Each pair in the pack was produced using premium materials.The Celtic "League Pack" pair came in a wheat/wheat/chocalate/black colorway with premium nubuck and chocolate croc print on the upper. The Celtics "League Pack" are becoming harder and harder to find. They are currently available on Pick Your Shoes for $149. 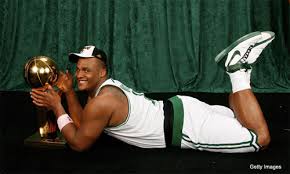 Paul Pierce Shows His Devotion to the C's

Paul Pierce showed his devotion to the Celtics organization today when he posted a picture of his new tattoo Shamrock laced on Twitter.

According to ESPN Boston, Pierce was quoted as saying "I got it done [Thursday] night," said Pierce. "The guy was referred to me by Marquis [Daniels] and [Kendrick Perkins]. They had some work done on them and I liked what I saw, so I went and got it done. I got [wife Julie's] permission... I just liked it; It's who I am. It's really cool to have it."

Pierce did admit he should have taken some aspirin before he went to the tattoo shop.

"It took two hours, so I should have," said Pierce. "I should have taken something because it really hurt."

Pierce wore a long-sleeve shirt under his practice jersey, but rolled up the right sleeve to showcase the new ink after the session.

The tattoo, which takes up nearly his entire forearm, features Pierce's nikcname, "The Truth," in block letters, with a four-leaf clover in the lower left and dice in the upper right. Pierce does a dice-shooting motion as the final player introduced for Boston.
Posted by Celtkicks at 5:20 PM No comments:

Ray Allen is one of the nicest players in the league and he proved it during a recent preseason game. After the shoot around, Ray Ray took off his Jordans and signed them to give to a lucky fan. Nate Robinson and Avery Bradley assisted Ray in his efforts to please the fans. Be on the lookout on EBAY for this rare pair.

Posted by Celtkicks at 8:18 PM No comments:

Fresh from the Court: Nike Hyperfuse

During last season's NBA Finals, Rajon Rondo set the sneaker community on fire with his bright green Nike Hyperfuses. This colorway sent shockwaves through internet sites and created high demand for a shoe that wasn't yet released. Rondo gives his thougts on the shoes in the following video:
object width="640" height="385">

Posted by Celtkicks at 7:25 PM No comments:

Shockwaves were sent through the sneaker community this summer when it was announced that Kevin Garnett was be leaving his "lifetime" contract with Adidas to promote the Chinese Sportswear Brand Anta. Pictures have surface of the his signature model, but US release info has yet to be announced. For now we can enjoy these pictures of the shoes. What are your thoughts on KG's decision to leave Adidas and more importantly what are you thoughts on the shoe? 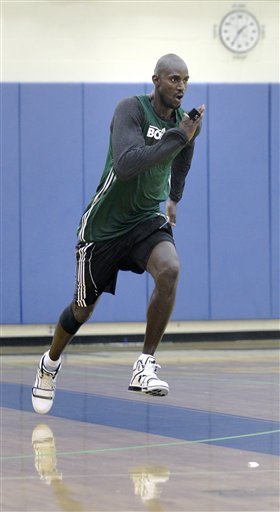 Posted by Celtkicks at 8:08 PM No comments: 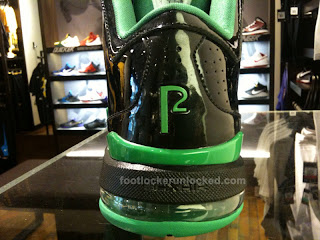 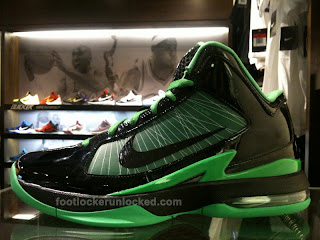 With the Celts off for the next few days, we thought we'd rediscover a ridiculosly fresh pair of Nike's that came out in the spring. On April 24th, House of Hoops released these Paul Pierce Nike Hyperflys. The shoe retailed for $120 and were exclusive to House of Hoops locations. This pair sports a large amount of patent leather on the upper with a Flywire outer panel. If you want to turn heads on the streets of Boston grab a pair of these Hyperflys. Be ready to pay a premium on Ebay as quanitities are limited on the open market.
Posted by Celtkicks at 8:31 PM No comments: 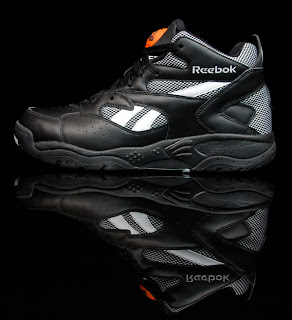 This is the innaugural "Sneaker Rewind" post. I thought long and hard about what sneaker should be the first on the site. I wanted a shoe that was under the radar and long forgotten. After much pondering, I decided upon the Reebok D-Time Pump. This shoe was release originally in 1993 as a nod to Dee Brown for winning the Slam Dunk Contest. During the 1993 season many Celts players wore the shoes including Reggie Lewis (pictured). OG models of this shoe are near impossible to find, however they were retroed in 2008 for the 15th anniversary of the shoe. 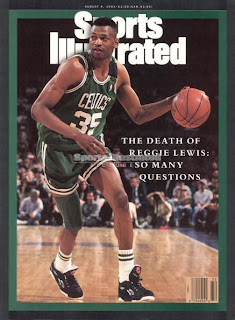 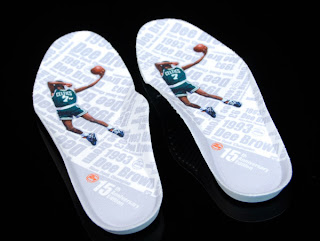 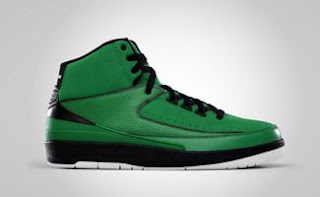 It seems that Jordan Brand has finally smartened up and started making Celtic Colorways in its releases. This pair of retro II's are sure to match any Celtics fans needs. If you'd like to get you own pair, the release info is as follows:

Fresh from the Court: Nate Robinson 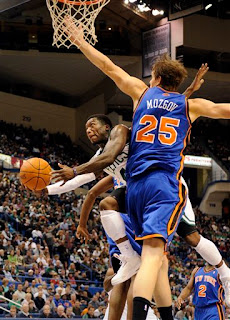 It is beginning to appear that Nate loves to rock heat against his former team. Tonight he sported a clean pair of Air Jordan III "Pures". These are no longer available in stores. If you'd like to own a pair of you own Expect to pay $130+ on Ebay.
Posted by Celtkicks at 9:47 AM No comments:

Nate Robinson loves to have a good time at practice. To the delight of his teamates, Nate ran sprints in Shaquille O'Neil's size 23 Player Exclusive Dunkmans.

Shaq's shoes are available for sale at Walmart for the affordable price of $19 in mens sizes.
Posted by Celtkicks at 9:45 AM No comments: 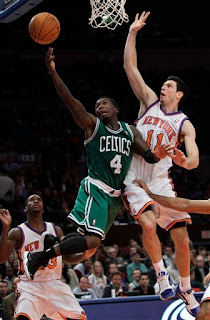 Wednesday night Nate Robinson lit up the court against his former team during the Celtics 104-101 preseason win . Nate Robinson was rockin' a pair of the highly sought after Air Jordan "Space Jam" XI. If you like own a pair of your very own, expect to pay $250+ on Ebay. Seeing these beauties in action is really making me regret not camping out during the original release.
Posted by Celtkicks at 9:43 AM No comments: